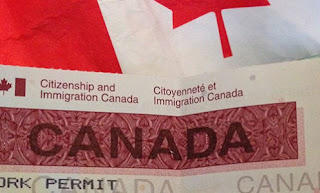 I finally got my Canadian residency.  It's been a long road and a considerable amount of money to get here but so glad it's over.

Much of the money was a waste with Canada requesting I acquire documents that they later never asked for.  They even asked me to get medical exams ($300 each) for my daughters that weren't even accompanying me to Canada.  Then  they asked for an US FBI background check on my oldest daughter.  I lied and told them it was in process (remember my daughter isn't moving to Canada) and then they of course never asked for it anyway.  The final thing was they asked me to get 2 photos taken of myself for the final interview.  So I went and paid to have them taken and they never asked for them.  So ridiculous.

Some of my US friends seem confused about what Canadian residency means.  They think I've denounced my US citizenship or something so let me explain.  I was allowed to work in Canada because Ubisoft paid for me to have a work visa.  The work visa allows me to work and live in Canada as long as I'm working at Ubisoft and my work visa hasn't expired.  If I leave Ubi, I have to leave the country.  My first visa was for 3 years and could be extended to 4 but that was it.  So if I was to stay in Canada I needed to apply for residency.

Residency just means I'm allowed to live in Canada kind of as a free person. I don't need to work at Ubisoft and I can get loans etc like a normal Canadian and I can live where ever I want.  I'm not a citizen of Canada.  If I want citizenship I need to apply for it which frankly after the government circus of getting residency I have zero interest in.

I'm still an American citizen, I just have been allowed to live in Canada by the Canadian government as long as I renew my residency every 5 years.

Let me give credit where credit is due.  If it was not for my girlfriend Julia I would have said fuck it and gone back to Cali in a heartbeat.  The first time I applied it was a nightmare and then Canada didn't even announce they had already filled their residency quota for that year so it was all a huge waste of time and money.  So my application was rejected and we had to do it all over again.  Rather than being welcoming the whole process felt like it was designed to keep people out.  I generally don't put up with a lot of crap so I was done.  But Julia was able to calm me down and get me through the even more insane Express Entry paperwork.  So thank you honey.
Posted by Chad at 2:42 PM