The big buzz on the street is Hello Games title No Man's Sky.  It is a space game that is completely procedural based.  So everything in the game is random in a way.  As it says every atom is procedural.  So the world is completely unique and unexplored.  Not only that world but every world.  Apparently not only can you climb every mountain you see but you can fly to any star in the sky and that star is a sun with it's own solar system of planets.  And you can explore each one.

This sounds mind bogglingly huge so everyone is talking about it.  I really hope it is all that we the consumer
dream it will be but the game designer in me has to question it.  I'm not a fan of procedural design.  Call me old fashion but I don't like putting design in the hands of programmers.  Sometime you end up with a pretty tech demo rather than a game.  While I love open random sandbox game play I still think there needs to be a designer guiding the fun.  If not No Man's Sky could be an entire galaxy of the same few algorithms that you quickly tire of looking at.

This is all speculation on my part.  I'm really just like the rest of us watching the video and keeping my fingers crossed. 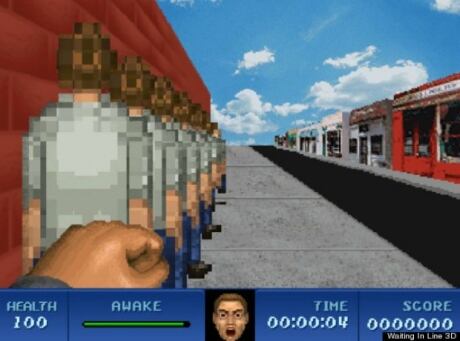 A game for modern times.

Keep awake by punching yourself in the face but not too much.  Yup, that's the game play.
Posted by Chad at 2:55 PM No comments:

Need For Speed: Most Wanted

For no particular reason I put in Need for Speed: Most Wanted and played it a bit last night.  I bought it quite some time ago and never really played it much but I heard it was entertaining so I decided to give it a chance.  Right at the start two things came to mind.

One, the gameplay is just like Burnout: Paradise rather than the original NFS: Most Wanted.  Jumping through billboards, really arcade-ish effects, etc.  I’m actually a car enthusiast so I don’t like it as much.  I prefer things to be a bit more realistic which leads me to the second thing I noticed immediately which is controls.  I’ve been playing a lot of GTA: 7 which has great driving controls

considering it’s not the focus, but I find the camera and the controls in Most Wanted sooo sluggish compared to each other.  Doesn’t seem to matter what car, from the Dodge Charger to the Veyron they all feel slow.  Drive a car in real life and crank the wheel all the way to the left or right, you will spin out.  Not in Most Wanted, there you slowly turn.  Also there are so many unnecessary camera shakes when the car accelerates or hits something.  I can’t quite put my finger on it but it also feels like the camera dips to the corners if you hit something or turn a corner which for me really throws off my feeling of control.  I find myself steering to compensate for the bouncing camera rather than the car.  This often gets me into a weird back and forth of over compensating one way then the other.  AND WHY IT THE ROAD ALWAYS WET???!? Worst driving conditions EVAR!

The biggest disappointment for me though is the story or lack of it.  Whether EA realizes it or not they were onto something with the original Most Wanted.  They added a story, a bad guy, a love interest, all in a racing game which is something nobody does and it worked.  Having been a real street racer I can say that there is definitely real stories and rivalries happening out on the streets and it was so awesome to have that addressed.  I thought it could have delved much more deeply.  Although the Fast & Furious movies got way out of hand I think they are a good example of what can be done with racing beyond just the cars.  It could really expand the sales base beyond hardcore racers.  The opportunity is still out there if someone has the brains to pick it up.