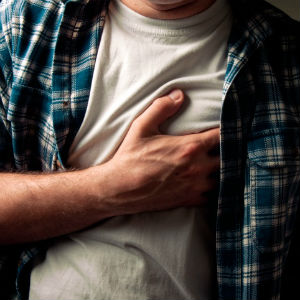 PvP games can sometimes be a huge adrenaline rush.  In a tense fight against other players the blood starts pumping and the heart start pounding. For most this is a great feeling that keeps you going back for more.  For me however it's something that causes me physical pain and possibly a deadly health risk.

When Quake 1 release my friend and I were amazed by the online PvP sessions.  Our desks were covered with server IP addresses and we even made our own Quake clan.  But I found during matches my adrenaline and anxiety would go so high I could hardly catch my breath and I'd have to stop and take a break.  I didn't understand why at the time but I knew it didn't feel good.

Then in 2003 I had a heart attack.  Not while playing PvP, I was just at work but it was no joke.  It was severe and required quite a bit of defibrillation to keep me among the living.  After surgery and having two stents inserted into my arteries I wanted to know why did it happen?  I was only 34 years old and not unhealthy or overweight.  Turns out I have terrible genes.  My  cholesterol and blood pressure numbers were through the roof.  So since then I've been taking loads of pills to keep everything under as much control as is medically possible.  My heart is "damaged" from the even but not to the degree that restricts me from normal activity.  But as much as I enjoy PvP gaming I tend to stay away from it for obvious reasons.

Most games don't affect me too badly, especially if the engagement are quick.  The fight happens and is over.  Also if it's something I've played over and over like when I was a QA tester it doesn't seem to bother me  as much.  Like you get bored or use to it.  Recently however I've been playing Sea of Thieves with my brother and it's been really hitting me hard.

The battles in Sea of Thieves are often long.  Big slow moving boats often building up to a hand to hand combat battle against the other crew.  This long lead up give my body plenty of time to pump up the anxiety and adrenaline.  By the time the hand to hand stuff happens I literally have pain in my chest and it takes me so long to come down from the conflict.  I REALLY want to learn to control this problem but I'm not sure if it's possible.

I don't want to stop playing PvP games because of this crap.  It really makes me mad that I can't enjoy them like a normal person.

I'd like to ask what other people do to control their adrenaline, how do you keep calm during PvP games?